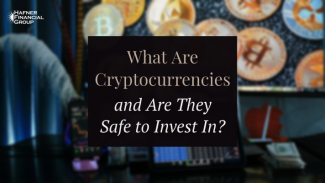 What Are Cryptocurrencies and Are They Safe to Invest In?

The sudden and explosive rise of Bitcoin from an obscure idea in the darkest corners of the internet to the household name it is today has everyone talking about cryptocurrency and whether or not they are a safe way to invest money. Bitcoin has a fluctuating value in the tens of thousands today from an initial cost of mere fractions of a penny just a little over ten years ago. The unprecedented rise in value has made fortunes for early investors and has created a massive new market for cryptocurrency worldwide. But what exactly are cryptocurrencies, how do they work, and are they worth investing in?

For those who are unaware cryptocurrency is essentially money that is both generated and stored electronically without a user’s need to use their name or a bank. The anonymous nature of this kind of currency makes it the go-to payment method for numerous black markets all over the darknet. Although there are numerous different types of cryptocurrency today the most famous and arguably the first of its kind was Bitcoin. Started in the late 2000s, this currency began life as a project developed by an anonymous person known only as Satoshi Nakamoto. Unlike nearly all other forms of currency that are created by governments using mints and careful economic planning, Bitcoin is generated by computers solving complex mathematical equations. These equations can take several days for a high-powered computer to process and upon completion, a Bitcoin is generated. This process is known as mining and in the early days of Bitcoin, it was the only way to obtain them.

What first began as a novelty soon began to grow as numerous services cropped up to support this new type of currency. The biggest known as Blockchain was started as a place for investors who had no interest in mining to trade money for Bitcoin and as a kind of virtual wallet to store them. In the early days of Blockchain and other similar services, virtual wallets were required to be connected to the internet. This open connection made them vulnerable to cyber-attacks and hackers. The deregulated and anonymous nature of Bitcoin made it incredibly attractive for criminals operating online and gained its first widespread use on the infamous darknet website Silkroad. Although the site has since been seized by the FBI and its founder arrested Bitcoin continues to be used by numerous copycat websites to this day.

Even though Bitcoin has gained a lot of legitimacy over its controversial history and the virtual wallets used to store them have gotten safer investing in them is extremely risky. The explosive rise in price has made numerous cryptocurrencies appear all over the market. Many early investors are hoping to see the kind of growth Bitcoin has had over a short amount of time but with so much saturation on the market, it’s hard to say whether or not history can be repeated. One of the biggest risks in investing in crypto is the lack of any kind of formal regulations put on trading them on the open market. The value of Bitcoin itself is closely tied with numerous illegal activities as well as vulnerabilities tied with the new technology associated with storing them. This lack of regulation could leave your investment open to being stolen with no safeguards in place to recover them.

Another vulnerability associated with cryptocurrencies is the danger of pump and dump schemes. With so many different coins on the market, a shoutout from a notable online influencer could be enough to temporarily inflate the value of a cryptocurrency that can be quickly sold off before its value plummets. The lack of probable cause for this kind of insider trading is hard to prove in court and is becoming more frequent as more and more coins enter the market and try to make a splash.

Controversies aside, are Bitcoin and other cryptocurrencies worth the investment? As always you should consult with a financial advisor before making any kind of serious investment especially with something as uncertain as Bitcoin. With the technology still in relative infancy, it’s hard to say whether or not crypto will truly become the deregulated worldwide currency of the future or whether it will be a bubble on the verge of bursting due to over-saturation. The fortunes made from Bitcoin have left many hoping for a repeat of history as they hope to see their low-value coins turn into hefty assets but with so many on the market, every coin is a gamble. Although many of us may not like the numerous regulations put in place for our own money and how we make our own investments, ultimately these regulations help shield us from these kinds of extremes.