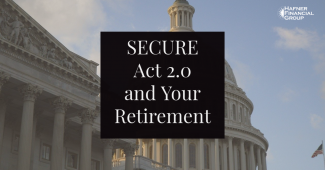 SECURE Act 2.0 and Your Retirement

In late 2019, the president signed the SECURE (Setting Every Community Up for Retirement Enhancement) Act into law.

Required minimum distributions (RMDs) for employer-sponsored plans and IRA accounts were raised from 70½ to 72 years old. It was a welcome change. The act also included smaller changes that aided workers saving for retirement.

But the SECURE Act also changed the rules which govern inherited IRAs, or so-called stretch IRAs. The change in this provision was more controversial because it required faster distributions, at least in most cases.

Although the changes are recent, Congress is already considering what many are calling SECURE Act 2.0. As the bill winds its way through Congress, there is no guarantee of passage. But it enjoys widespread bipartisan support, and both the Senate and the House have drafted similar bills.

The devil is always in the details, but we are monitoring progress and believe now is a good time to provide a high-level overview.

Please feel free to check in with your tax advisor on tax-related matters.

Taking your first distribution from a tax-deferred retirement account will depend on many factors, but if the funds are not needed, it is usually a good idea to defer withdrawals until required.

By delaying a withdrawal, the investments maintain their tax-exempt status. Or, if you need cash before RMDs are required, you decide how much to withdraw. You are not bound by an arbitrary rule.

As proposed, Secure 2.0 maintains the catch-up limits for those aged 50 but increases the annual catch-up provision to $10,000 for participants ages 62 through 64. The new limit begins in 2023. This new maximum is indexed to inflation.

Presumably, it’s a way for the government to capture revenue. Nonetheless, Roth IRAs are not subject to RMDs, and withdrawals are exempt from federal income taxes.

SECURE Act 2.0 would permit employers to make matching contributions to their 401(k) plans tied to the employee’s student loan payments. The goal: encourage younger employees to save for retirement.

While we recognize this provision will probably complicate the administration of a 401(k) plan, we applaud the proposal simply because we know that the sooner one begins saving for retirement, the sooner one may enjoy the power of compounded returns. As we always counsel, it’s never too early to start saving.

The proposed changes discussed are the more important components of the proposed act, in our view. But we also wanted to briefly mention some of the additional provisions. SECURE Act 2.0 would also:

It would also place limits on employers who attempt to capture excess plan payments from a participant.

SECURE Act 2.0 may pass as proposed, changes could be made, or the bill could run into unforeseen obstacles that prevent it from being enacted into law.

As we have already said, this is a high-level peek at what is being proposed. Any advice we may provide will be tailored to your individual circumstances.

We suspect changes to the proposed law will probably be made, but odds favor passage. We are happy to entertain any questions.