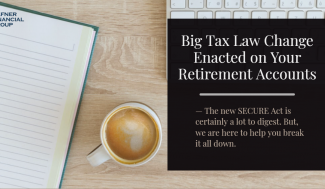 The benefit of this planning technique is that the non-spouse beneficiary would not have to recognize the entire inheritance as taxable income in the year they inherit the money.

That is a $161,000 increase in federal tax due because of the $500,000 IRA inheritance. In addition, state income tax would deteriorate the inheritance further. For example, in California the state would tax the inheritance at a marginal rate of 10.30% with about $60k of tax due. Adding both Federal and State tax together, $221,000 of the $500,000 inheritance would go to taxes. Essentially Sally keeps 56% and the IRS & FTB get 44% of her mother’s retirement savings.

The stretch IRA was first introduced in the late 90s and it allowed a beneficiary to “stretch” the income out of an inherited IRA over the beneficiary’s life expectancy. This essentially meant taking smaller distributions for many years, thus not having to realize the entire inheritance as income in a single year pushing up their taxes. For example, if Sally’s mom passed away at age 70, and Sally was 45 at the time of the inheritance, Sally would be able stretch the inheritance income out over approximately 38.8 years. This would essentially mean she would have to take taxable distributions of about $12,887 ($500,000 / 38.8) per year, clearly keeping her and John in the 24% tax bracket that year.

This week congress has passed the SECURE Act* and the President has now signed it into law. While this tax act has many financial planning implications which we will review from a high level, the biggest change is the elimination of the Stretch IRA for most people. For those that inherit a retirement account after 2019, the entire inherited retirement account must be emptied by the end of the 10th year following the year of inheritance. This essentially can be looked at as a wealth tax for many retirement savers because it will accelerate their beneficiaries income, which could likely push that beneficiary into a higher marginal tax rate.

Within the 10-year period, there are no distribution requirements, so a designated beneficiary will have some flexibility when it comes to timing distributions from the inherited account(s) for maximum tax efficiency as long the entire account balance has been taken by the end of the 10th year after death. If you inherit a retirement account, it may make sense to defer distributions during years you have other sources of higher income.

While similar to a traditional 401k or IRA, a designated Roth has one important characteristic, tax-free distributions. Based on the new law, an inherited Roth (other than Eligible Designated Beneficiaries) will be subject to the 10-year distribution rule as well, but it is important to note that these distributions will still be tax-free. This make a Roth account even more attractive than before the law was passed as the distributions won’t push you into a higher tax bracket.

I NAMED MY TRUST AS THE BENEFICIARY OF MY RETIREMENT ACCOUNTS, WHAT NOW?

In general, trusts created to serve as the beneficiary of a retirement account are drafted in such a manner as to comply with the “See-Through Trust” rules, which allow the trust to stretch distributions over the oldest applicable trust beneficiary.

For instance, many trusts are drafted in a manner that only allow for the required minimum distribution to be disbursed from an inherited IRA to the trust each year, with a corresponding requirement for that amount to be passed directly out to the trust beneficiaries. In light of the changes made by the SECURE Act, for those beneficiaries’ subject to the 10-Year Rule, there is only one year where there is an RMD…the 10th year!

As a result of this change, trusts drafted with language similar to that referenced above might not allow the trustee to take any distributions of the inherited account until the 10th year after death (because prior to that 10th year, any IRA distributions would be ‘voluntary’). And then, in the 10th year, the entire balance would have to come out in one year to the trust… and be passed entirely along to the trust beneficiaries (as a mandated RMD). The end result could be what would amount to a very high tax bill, as the entire value of the retirement account is lumped into a single tax year as a distribution to the beneficiary.

Other trusts often require that all, or a substantial portion of retirement account distributions, remain in the trust (and not distributed out to the trust beneficiaries). In such circumstances, amounts retained by the trust are subject to trust tax rates, which are highly compressed as compared to individual tax rates.

Given the tax rates of these trusts, significant amounts of wealth could evaporate in the form of trust taxes. You may not want your beneficiaries to burn through their inheritance (hence the possible need for a trust in the first place), but it is even less likely that you want the IRS to get a large portion of your savings. It is critical to have your trusts reviewed in 2020 to ensure proper language and beneficiary designations are established.

WHAT ELSE HAPPENED WITH THE NEW LAW:

If you or your family are facing any of these topics as we proceed into 2020, we highly encourage you to setup some time so we can discuss your personal situation. There are substantial planning opportunities that exist, but it is critical to be proactive vs reactive.

Click here to book a 30-minute conversation to learn how you can improve your situation today!