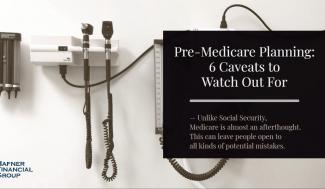 Pre-Medicare Planning: 6 Caveats to Watch Out For

Unlike Social Security, which people tend to think about many years before claiming, Medicare is almost an afterthought. As long as people are working and covered by an employer plan, they don’t think very much about how their health insurance might change upon turning 65 or leaving employment. This leaves them open to all kinds of potential mistakes.

In the United States today, Medicare is the health care system for individuals 65 and older (and disabled individuals who have received Social Security disability benefits for 24 months). As comfortable as you may be with your pre-65 insurance, it is important to know that many things will change once you turn 65 or leave employment.

Pre-Medicare planning should begin no later than age 64—earlier, if you are doing tax planning to reduce the IRMAA, or at least a year before leaving employment if you are working past age 65. You will need this much time to get ready for the day you transition to a whole new health care system.

Caveat #1: Your doctor may not accept Medicare

Now, let it be known that most doctors do accept Medicare. But if you choose to go into a Medicare Advantage plan as opposed to original Medicare, your doctor may not be in that plan’s network. People who have strong feelings about keeping their doctor will need to understand this. Before signing up for a Medicare Advantage plan they’ll need to check the plan’s network and make sure their doctor is in it (and hope the doctors stays in it). Even if they are going with Original Medicare they should check to be sure their doctor accepts Medicare

Caveat #2: Once you go onto Medicare you can no longer contribute to an HSA

This issue is coming up more frequently these days as more employers switch to high-deductible health plans with health savings accounts. Once a person enrolls in any part of Medicare, no contributions can be made to an HSA, beginning with the first month of enrollment. Some people are caught by surprise, not learning about this rule until many months after enrollment. For example, if you apply for Social Security at age 68, but did not realize that you were automatically enrolled in Medicare Part A and that it was made six months retroactive. If HSA contributions were made for any of those months, they will need to be backed out. If they are not, the money will be taxable and you will be subject to a 6% overcontribution penalty every year the contributions, and the investment earnings thereon, remain in the account.

If you voluntarily enroll in Medicare, or if you start Social Security and are mandatorily enrolled in Medicare (you must take Part A if you want to receive Social Security), part of your pre-Medicare planning will involve stopping any HSA contributions. If you are still working and want to maintain your employer health insurance, you can ask your employer for a different type of plan; if your employer is making the HSA contributions ask for that money in the form of salary or other benefit.

Don’t forget about the income-related monthly adjustment amount (IRMAA). Many people who have not yet entered the world of Medicare don’t know that monthly premiums for Part B and Part D are higher for individuals with income over $87,000 and couples with income over $174,000. The IRMAA itself may help inform your decision to stay on an employer plan or go off the plan and onto Medicare. If you are still working and earn a high salary, the IRMAA may tip the scale in favor of staying on the employer plan as long as possible.

But at some point everyone goes onto Medicare—once you stop working if not before. And that’s when the IRMAA could kick in for those who have not previously managed their assets and income to avoid it. This is why savvy Medicare planning should start early, in time to get those Roth conversions done in the most tax-advantageous manner so that RMDs starting at age 72 won’t trigger the IRMAA (or at least keep it to a lower tier). Ideally (and in the absence of otherwise adverse tax consequences), Roth conversions should be done more than two years before Medicare starts. That way, the taxable IRA distribution that’s taken for the Roth conversion won’t figure into the IRMAA. Age 60 is not too early to start talking about Medicare and IRMAA management.

Let’s say a person retires before age 65. They want to continue with their employer-sponsored health insurance and are willing to pay the premiums themselves. So they go onto COBRA. This is all well and good as long as they enroll in Medicare at 65. At that point the COBRA would stop and they can find supplemental insurance (Medigap) or enroll in a Medicare Advantage plan to have comprehensive coverage.

Let’s say you retire before age 65 and are lucky enough to have retiree insurance. (In this age of shrinking retiree plans, many people are forced to work until Medicare age in order to have health insurance.) As long as you are under 65, the retiree plan is the sole payer, and everything works pretty much as it did before. You incur a medical bill, the bill is submitted to the retiree insurance company, and the insurer pays the bill.

Pre-Medicare planning involves understanding that you must enroll in Medicare at 65, and you must contact your insurance company to find out how your plan will change. Some retiree plans offer good supplemental coverage, but only if you are enrolled in Medicare. If the plan offers creditable prescription drug coverage, you may not have to enroll in Part D. You should take direction from your plan regarding whether or not to enroll in Part D.

One great thing about Medicare is that this government program is open to all American citizens and legal residents age 65 and over regardless of health status. Part A is free if you’ve paid into Medicare for ten years, and Part B costs a reasonable $144.60 per month (plus the IRMAA if applicable). People who had trouble getting reasonably priced insurance prior to turning 65 will be elated to go onto Medicare.

The problem is that Medicare doesn’t pay the full cost. There is a hefty Part A deductible ($1,408 in 2020) for hospital visits, and only 80% of doctor bills and procedures are covered. This is why most people get private insurance to go with their Medicare. Medicare Advantage plans also take everyone regardless of health status, but these plans may not be the best for some because you have to get your care close to home, within the specific provider network. For those who travel, have multiple homes, or simply like the stability of a plan that doesn’t change from year to year, a Medigap policy is the best form of supplemental insurance. But in most states Medigap insurers do NOT have to take everyone unless they are within their Medigap open enrollment period, which is the six-month period after enrolling in Part B. After that, the person is subject to underwriting and may not qualify for a policy.

This is another pre-Medicare planning consideration. Everyone getting ready to enroll in Medicare should be informed of the six-month Medigap guaranteed-issue period so they’ll know that if they don’t take advantage of it, they may never be able to get a Medigap policy. There are a few exceptions, such as the one-year Medicare Advantage trial period, and some states hold Medigap insurers to a stricter standard. But this is one of the things many people aren’t informed of until it’s too late: they go into a Medicare Advantage plan when they first become eligible for Medicare and after a few years decide they want original Medicare; at that point they may not be able to get a policy. Or maybe they’re still working and keeping their employer insurance but they sign up for Parts A and B to get supplemental coverage. They need to know that six months after enrolling Part B that Medigap guaranteed-issue period ends. People who are keeping employer coverage after age 65 should not enroll in Part B until they are ready to leave the employer plan. At that time they will arrange to have their Medicare and their Medigap policy start immediately after the employer insurance ends and will have no trouble qualifying because they’ll be within the Medigap guaranteed-issue period.