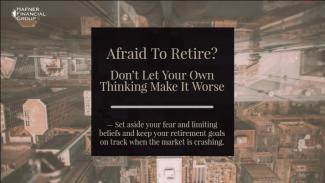 Afraid To Retire? Don’t Let Your Own Thinking Make It Worse

The stock market volatility in late 2018 and early 2019 was quite something, yes?

A big crash in December was headlined as “The worst December since the Great Depression”  – invoking an event that’s sure to strike fear into any investor’s heart.

Then a historical rally in early 2019.

But if your thinking has made you afraid to retire stop!

I’ll show you how to set aside your fear and limiting beliefs and keep your retirement goals on track when the market is crashing.

Staying Calm and Focused Is One Key To Retirement Income Planning

One of my jobs as a financial advisor is to soothe you and help you manage turbulent times. I encourage my clients to come see me for special meetings to discuss the market, their investments, and their goals. I share information to provide context to the market turbulence, ease their fears, and encourage them to stay calm and focused on their desired retirement date.

Take a couple of years ago during a period of high volatility. All of my client meetings were successful. They were able to continue their investment programs and financial plans with renewed confidence in spite of the continuing market volatility.

There was, however, one exception to my successful “volatile market outreach program.” For purposes of this article I’ll call him Frank.

Frank didn’t accept my invitation for a special meeting. He instead sent me an email instructing me to cancel his automatic investment program.

Several years before, Frank and I had determined that if he was to retire at the age he wanted, he would need to invest an extra $500 every month for his retirement income planning. Together, we decided that the best way to make this happen was to set up an automatic debit from his checking account every month with the proceeds being directly invested into his Individual Retirement Account (IRA).

When I spoke with him on the phone, he told me he had no choice. He had to cancel the automatic investment because he was too close to retirement and couldn’t afford to lose any more money.

I told Frank that I thought he was making a mistake. I encouraged him to come see me but Frank told me he wasn’t interested. He didn’t have time.

Although I did my best to convince him that stopping the automatic investment was a mistake, he overruled me and it was canceled.

In retrospect, it’s apparent to everyone that although the market did go down, it recovered relatively quickly. Thus, canceling the automatic investment was not in Frank’s best interest.

But that isn’t the point.

There are two bigger issues that I’d like to address. The first issue: Frank was making decisions based on fear. and that is never good idea. No one makes their best decisions when they’re agitated or fearful.

Are False Beliefs Tripping Up Your Retirement Income Planning?

The other issue: Frank was also making decisions based on beliefs he thought were true but were in fact false.

Frank believed that adding money to his IRA while the market was declining was a mistake. He felt that doing so would move him further away from his retirement goals. He also thought that these negative consequences would be compounded because he was close to retirement.

What Frank didn’t realize was that the decline he was afraid of could actually have been a windfall for him. In fact, because he was so close to retirement, it could have been an especially good opportunity to improve his situation before retiring.

How could this be possible, you might wonder? It has to do with a principle called dollar cost averaging (DCA).

Dollar Cost Averaging Could Bring You A Windfall

Dollar cost averaging is an investment technique where you buy a fixed dollar amount of a particular investment on a regular schedule regardless of the share price.

DCA also lowers the average cost per share over time, which increases the opportunity for profits. This is another goal of a successful investor.

No matter how the stock market performed; whether up, down or sideways, had Frank continued to put $500 per month into his IRA, he would have accumulated more shares and moved closer to his goal.

Are You Ready To Take Advantage Of A Market Downturn Opportunity?

For someone nearing retirement, market downturns shouldn’t be feared, rather they are better seen as buying opportunities. A big decline is a great time for you to increase your retirement savings.

When you ask yourself the question, “When can I retire?”  be sure to have a conversation with your financial advisor.

Then, if you feel uneasy because the markets are gyrating (or for any other reason) you should be able to get the assurance you need to stay calm and focused on your retirement goals.

While no one should take risks they aren’t comfortable with, a conversation with a trusted advisor may help uncover opportunities. Make sure you get the benefit of their knowledge and experience so you can keep on moving closer to your retirement dreams.