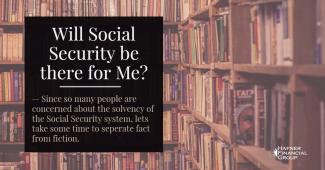 Will Social Security be there for Me?

How many of you took a vacation this summer? I certainly did.

But I wonder, would you have gone on vacation if you thought you might run out of money before it was over? I don't think I would have. That would be kind of crazy.

But many people are worried that they may be in  a similar situation when it comes to retirement . This is because they have serious concerns that Social Security will not be available when it is their turn to retire.

Since so many people are concerned about the solv ency of the Social Security system, I thought it would be a good idea to take some time and separate fact from fiction and fear from reality.

Let's start by looking at how Social Security works.

Social Security was designed as a pay-as-you-go system. The way it works is pay roll taxes are taken from current workers and placed into a trust. From that Trust, benefits are paid out to current retirees.

At this time, the Trust currently has more funds than are needed to pay current benefits. But, as the Baby Boom Generation continues to retire in record numbers, those funds will be drawn down until they are exhausted and the Trust is empty. In fact, if nothing is done to restore the system, it is estimated that the Trust will run out of money by 2034.

You might think that none of us will receive benefits once the Social Security Trust goes bust but that is not correct.

As we said above, Social Security is a pay-as-you-go system. So even though the Trust might be exhausted, the money coming in from those of us working would still be paid out to retirees in the form of Social Security benefits. The problem lies in the fact that there are fewer younger workers to pay into the system that will have a significant number of retirees to support.

If nothing is done to resolve this problem, there won't be enough money coming in to cover all the promised benefits.

In fact, it is estimated that there will only be sufficient cash flow to cover 79% of the promised benefits .

Although 2034 is a long way off and the system is not in imminent danger, most people agree that the sooner reforms are made, the less painful they will be for all of us.

Is there a solution?

There are a number of ideas that have been proposed as a means to restore the Social Security system .

One of these ideas is to raise the maximum earnings that are taxed for Social Security.

Did you know that some income is NOT taxed for Social Security? In fact, only the first $127,200 of earned income was subject to the Social Security tax in 2017.

One relatively simple way to restore or possibly improve the solvency of the Social Security System would be to increase the earnings that are taxed.

Another proposal calls for raising the full retirement age for younger Americans. There is a precedent for this course of action. This is in part what Ronald Reagan and the Congress did back in the 1980's to keep the Social Security system solvent through the present.

Although this might, at first, seem unfair to our younger friends and relatives, I think a reasonable case can be made for increasing the age for full retirement. This is because life expectancy has increased both consistently and dramatically over the years.

As a result, people are living longer and collecting benefits for longer periods of time. Probably far longer than anyone ever expected when Social Security was enacted back in the 1930s.

Still another proposal to reform the system would be to change the formula for calculating benefits so that future increases would happen at a slower pace before collecting benefits.

Some people are also talking about changing the formula for cost-of-living adjustments. This could give retirees smaller annual increases. These changes are expected to be minimal however.

As you can see, "fixing" the Social Security System is not that complicated. With some relatively simple and straight  forward changes, the system could be restored to solvency for many years to come. Much like they did in the 1980s.

However, it will take a fair amount of courage and political will from our elected representatives. They will need to get behind and support some combination of these ideas to ensure these changes are enacted.

Although I have no doubt this will happen and the system will be restored, I also believe that the political will may not be found until we are teetering on the brink of disaster. It seems like that is the only way anything gets done in American politics today.

You can learn more about Social Security reform proposals by visiting American Academy of Actuaries at their website, actuary.org .