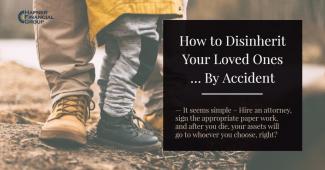 How to Disinherit Your Loved Ones … By Accident

It seems simple – Hire an attorney, sign the appropriate paper work, and after you die, your assets will go to whoever you choose, right?

But what if things don't get distributed the way you directed?   Is it actually possible to work with an attorney, draw up a will, and still have your possessions go to the wrong people?

The sad truth is that this happens far more often than you might imagine.

There's one case in particular that that provides an excellent example of just such an unfortunate event.

The problem wasn't discovered until after Jack had passed away.

His last wishes were quite simple; he had requested that all his possessions be split equally between his sister Mary and his girlfriend Cybil.

Jack's estate was valued at $3 million and although his instructions were simple, carrying them out would prove to be surprisingly complicated.

The problems began when it was discovered that Jack's sister Mary had passed away several months before Jack.   This left people wondering what would happen with Mary's share of the estate? Her two daughters were very interested in the answer to this question.

Initially things looked good for Mary's daughters.   The attorney told them that although the will left half of Jack's assets to their deceased mother, it also included a per stirpes stipulation.

Per stirpes   requires that when a beneficiary dies before the person who created a will, any assets the beneficiary would have inherited are to be passed down to that person's heirs.   In this case to Mary's daughters.  (For more information on per stirpes   click here .

Mary's children were pleased to hear this but, unfortunately for them, those feelings wouldn't last.   That's because most of Jack's estate, $2.5 million, was held in an Individual Retirement Account (IRA).

In my experience, the beneficiaries on most people's IRAs and wills are the same.  It is normally parents leaving money to children.  But what happens when they're not the same?   Does your last will and testament take precedence over an IRA or is it the other way around?

The women were disappointed to learn that a will does not take precedence over an IRA. It was the beneficiary on the IRA that would determine who would inherit the IRA and thus the bulk of Jack's assets.

Unless of course the IRA had a per stirpes stipulation.

As the lawyer continued to process the estate, he saw that although there had been an option to include a per stirpes stipulation on the IRA, Jack had not selected it.   Since he had not selected it, Mary's daughters were not entitled to any of it.

As I said earlier, problems like these are quite common. There are however, some simple steps you can take to avoid them . One of the most important steps is to review your beneficiary designations on a regular basis. This is so simple it is often overlooked, but as you see, it can have incredible consequences.

If Jack had indeed wanted his nieces to receive their mother's share of his annuity, all he needed to do was to sign a simple beneficiary update form after she passed away.   By doing this, he could have replaced Mary with her daughters as beneficiaries and avoided all this confusion.

Or, better yet, he could have chosen the per stirpes option when he originally opened the IRA. This option is normally chosen by   simply checking a box . Had he done either of these things Mary's daughters would have received their mother's share of his estate.

But that is not what happened.

Although I've taken some liberties with this story and changed some of the details, this really did happen. And unbelievably, situations like this are unfolding all the time.

Don't let this happen to you!

Be sure to review your beneficiary designations on a regular basis.   If one of your beneficiaries passes away, be sure to update all the appropriate documents in a timely manner .   Do not put it off.

After all, the last thing you want to do, is accidentally disinherit the people you love most.