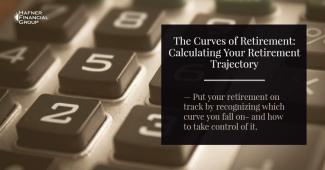 The Curves of Retirement: Calculating Your Retirement Trajectory

Have you ever watched a good basketball player shoot a free throw? They bounce the ball a couple of times and line up the shot. Then, whoosh! The ball sails through the air and drops through the rim with nothing but net. It’s a beautiful sight to see. A perfect trajectory!

However, highly-skilled players calculate how to achieve the perfect free throw curve with a combination of distance, speed, and height.

Your financial advisor creates the best retirement plan for you by calculating the perfect combination of distance (the amount of time you need your retirement to last), speed (how fast you go through your money), and height (how much money you spend each year).

There are three common retirement curves: red, green, and blue.

The Red Curve of Retirement: Spending Money Too Fast

Families in this group spend assets too quickly. This often happens because they are so busy living their lives that they procrastinate and don’t get around to thinking about retirement until it is upon them. Without adjustments in spending, this situation can turn into a disaster where couples might have to depend on adult children for support or be forced to live on Social Security alone.

The Green Curve of Retirement: More Money but No Fun

No one ever says, “I look forward to a retirement of all saving and no spending.” But Green Curvers do just that. They are so worried about running out of money at 80 or 90 that they skip going to Tahiti or the Caribbean. They may even skip going out to dinner beyond fast food. Without adjustments, they’ll spend their entire retirement in fear of running out of money, even though the assets in their investment accounts keep growing.

The Blue Curve of Retirement: The Perfect Free Throw

When you are on the Blue Curve of Retirement, your assets continue to grow until the midpoint of Retirement and then they begin to decline. The Blue Curve represents a healthy balance between spending and life expectancy. By taking the time and doing the work to put yourself on a Blue Curve of Retirement, you are more likely to have the courage to spend more money in the early years of retirement when you have the energy and the inclination to do so. But you’ll be able to do this spending without fear of running out of money.

The basketball player with the perfect free throw didn’t always have this ability. He learned to adjust distance, speed, or height as his career progressed. In fact, he may have adjusted all three. And he didn’t do it alone, he worked with a coach. If you just realized you’re on a Red or Green Curve, don’t panic. Ask your financial advisor for some coaching.

By making a few changes, a Red Curve can be adjusted to last longer into the future. If you are on a Green Curve, your advisor can help you understand how much money you can spend now without endangering your long-term future. In fact, the coaching you need could be as simple as a “You can do this!” cheer about being able to spend now and not starve at 90.

Who knows, if you gain control of your retirement curve, maybe you could even splurge on an NBA basketball camp and learn to shoot your own perfect free throw.