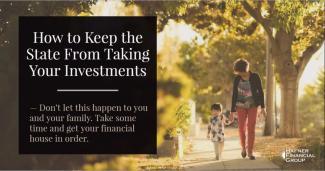 How To Keep The State From Taking Your Investments

Have you ever lost your keys? It’s incredibly frustrating, isn’t it?

It seems impossible. How can they not be right where you left them?

The good news about losing your keys is that you are going to discover they’re lost pretty quickly. After all, without them, you can’t drive your car or get into your house.

But what about your investment accounts? Do you think it’s possible to lose them? And I don’t mean lose value because the market went down.

I’m talking about completely forgetting you own an IRA, for example, and never realizing that it is lost.

If you think this is a ridiculous and impossible proposition, I have news for you, you are wrong.

This often happens when financial assets such as a bank or brokerage accounts remain inactive for long periods of time.

When financial institutions realize they have dormant accounts like this, they are required by law to make efforts—such as sending reminders and issuing notices—to locate the owners of these assets.

But if they are unable to locate the owners, the assets are transferred to the state. They are said to have been escheated when this happens.

There are currently over 5 billion dollars in unclaimed funds in NY State alone. And over 124 million of those dollars are from Erie County residents.

How is this possible, you wonder? I used to wonder the same thing.

When I first heard about this many years ago, I had a hard time believing it was true. How was it possible that so many people could forget about and lose so much money?

But after observing the practices and habits of a wide variety of individuals and families over my 25 years as a Financial Advisor, as well as seeing my own shortcomings, I am no longer surprised.

Misplacing or losing financial assets is far easier than you might think.

The most common reason financial assets are forgotten, lost, and ultimately “escheated” to the state is because many people are unorganized in their financial affairs.

I have a client who is a good example of this. Let’s call him Bernard.

Bernard is an intelligent and articulate man. He is successful in both business and life, but he’s also had some health issues recently that have been a big distraction.

Bernard has not lost assets to NY State yet, but his story is a cautionary tale of how easy it could be for this to happen to any of us.

During a review meeting with Bernard several years ago, I made a note that he had four IRAs with a certain financial institution.

I suggested he roll them over and consolidate them into one IRA, so we could simplify things and better manage the investments. Bernard agreed initially, but then changed his mind and decided it was better to leave things as they were.

Later the next year, when I brought up the subject again, I was surprised to learn that Bernard had forgotten how many IRAs he had.

“I only have three IRAs. Why do you keep saying I have four?”

The reason Bernard felt so certain he only had three IRAs was because he had recently received a statement that only summarized three of the IRAs, not four.

After hearing Bernard out, I went back and checked my notes. Sure enough, there were four IRAs.

Bernard had completely forgotten that he had a fourth IRA worth thousands of dollars.

Even worse, he was arguing with me and saying it didn’t exist.

Fortunately, I had a copy of an old statement to show him and we were able to roll all the IRAs together before any assets were lost or turned over to the state.

But do you see how easy it is to lose track of an investment account?

If Bernard had moved to a new address and the financial institution had been unable to locate him, it might only have been a matter of time before his IRA was turned over to the state.

Let me give you another example. I’m embarrassed to say this one comes from my own personal experience.

A while back I was moving my checking account from one bank to another. In doing so I was keeping a close eye on the activity in the account I was closing.

You know how it is. We set up so many auto deductions to pay various bills that it’s hard to keep track of them all. Because of this I took my time closing the account, so it wouldn’t be overdrawn and generate overdraft fees.

As I was going through this process, I noticed that the account was being debited for a small amount of money every month by a company called Penn Mutual.

Now, I had never heard of Penn Mutual. How was it possible that they were taking money out of my checking account every month?

A little research and some persistence pays off

My first thought was that it must have something to do with my property & casualty insurance. Maybe the agency had changed something without telling me.

But after calling them, they told me the charge didn’t come from the car, motorcycle, or umbrella policy.

In fact, I was surprised to hear that they had no idea where the charge came from or what it was for.

After I got off the phone with them I googled Penn Mutual and found a contact phone number.

It took a bit of persistence but after being transferred around several different departments, I was finally informed that the debit was authorized by me and that the money was being used to pay for a life insurance policy.

In fact, it was a Life Insurance Policy on my life that I had completely forgotten about!

A few years earlier, my wife and I had updated our Wills and Powers of Attorney and reevaluated our Estate Plan. In doing this we also decided to increase our life insurance coverage.

Once the people at Penn Mutual told me all this I remembered it clear as day.

But before they reminded me, that policy had so completely vanished from my memory and my life that it was as if it had never existed.

They wouldn’t have, and they might never have received the life insurance proceeds.

All of the planning my wife and I had done together as well as the life insurance policy we had paid for would have been for nothing. All that money and effort might have been wasted because it had been forgotten. What a shame.

Don’t let this happen to you and your family. Take some time and get your financial house in order.

To help you do this, I have provided a link to the Hafner Financial Group’s Personal Financial Inventory Document.

This document will help you identify the important information you should be keeping track of as well as provide a centralized location to store this information.

It’s a little long but don’t let that stop you. I suggest you set a goal of completing a couple of pages every week until it is complete and then review and update it every couple of years, so it remains relevant.

Also, be sure to tell your loved ones where it is.

if no one knows where you keep your Personal Financial Inventory Document, or that it exists, it is useless.

How To Find Escheated Assets

One more thing you should do after you’ve read this article is go to NY State Unclaimed Funds website. This is a site where NY State Residents can see if there are any unclaimed assets in their name. (If you live in another state, they will have their own website.)

It’s easy to do. Simply enter your name and address, press send and see what you find.

It’s an especially good website to visit if you’ve had a loved one pass recently. You might come across some assets that have been forgotten and lost.

Most importantly, treat your financial accounts at least as well as you do your keys. Keep an eye on them. Make sure you know where they are. Consolidate small accounts into larger ones and take the time to complete the Personal Financial Inventory Document.

You worked hard for your money. Make sure you’re the one who gets to spend it, not NY State!