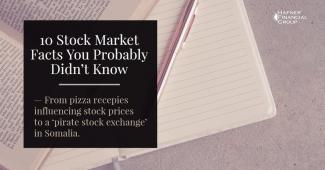 1.   After seeing it hit a low point in 2009, Domino's Pizza saw their stock grow 233 percent within a year after changing their pizza recipe. -  Source

2.    Walt Disney gave his housekeeper Disney stocks every year for the holidays. She died a multi-millionaire. -  Source

3.    Microsoft saved Apple from going under in 1997 by buying 150 million in non-vote shares so they wouldn't become a monopoly. -  Source

4.    In preparation for his role in Wall Street: Money Never Sleeps, Shia LaBeouf worked extensively with traders and researchers on the world of finance and economy. He even invested 20,000 dollars, and ended up making more than 400,000 dollars. A few people who trained him were later arrested for illegal acts of trading. -  Source

6.    Immediately after the Challenger explosion, shares of every corporation involved in the Space Shuttle dropped. By the end of the day, most had rebounded, but only Morton Thiokol remained low. This was months before the official investigation found Thiokol to be responsible for the disaster. -  Source

7.   The stock market got the names "bear and bull" because of caballeros in California. The caballeros put California grizzlies in battle with bulls. They observed bears swiped downward and bulls hooked upward, thus lending the analogy. This led to the California grizzly's extinction. –  Source

9.   In 1999, 15-year-old New Jersey boy named Jonathan Lebed was making up to $74,000 a day in the stock market by using internet message boards to manipulate prices. The Government eventually went after him, but he was able to keep half a million dollars of his gains. –  Source

10.   There is a ‘pirate stock exchange' in Somalia where locals can invest in pirate gangs planning hijacking missions. –  Source

* This is for informational purposes only, is not intended as a substitute for individualized professional advice,  and is not intended to advocate or solicit interest in any investment.